Have you ever wanted to know the 20 year history of climate change negotiations but only had a minute-and-a-half to understand it.  Well, you are in luck. Enjoy!

The International Energy Agency released their 2012 version of World Energy Outlook today and it featured some interesting highlights.  Here are some of the points that peaked my interest:

Fossil fuels according to the New Policies Scenario:

In the Efficient World Scenario, greater efforts are placed on energy efficiency measures that would cut the global demand by half.  Other benefits realized in this scenario include:

This is all well and good, but there are a few things to note about the conclusions:

Finally, and very sobering, the report concluded that the unless a global emissions agreement is implemented by 2017, the planet will not remain within the 2 degree Celsius range that most scientists agree is the upper safe limit on warming.

What EU country do you think is the hardest working?  What about the most corrupt?  On May 29th, the Pew Research Center did a study on the attitudes among the populations in various countries in the EU.  I found this chart absolutely fascinating!  While the chart speaks for itself, the results (5 of 8 countries believe their government is the most corrupt) tell me that the population is losing trust in their leaders.  Not a good thing at such a volatile moment.  Let me know what you think: 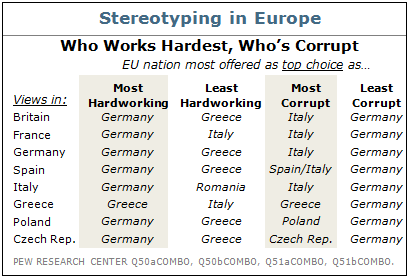